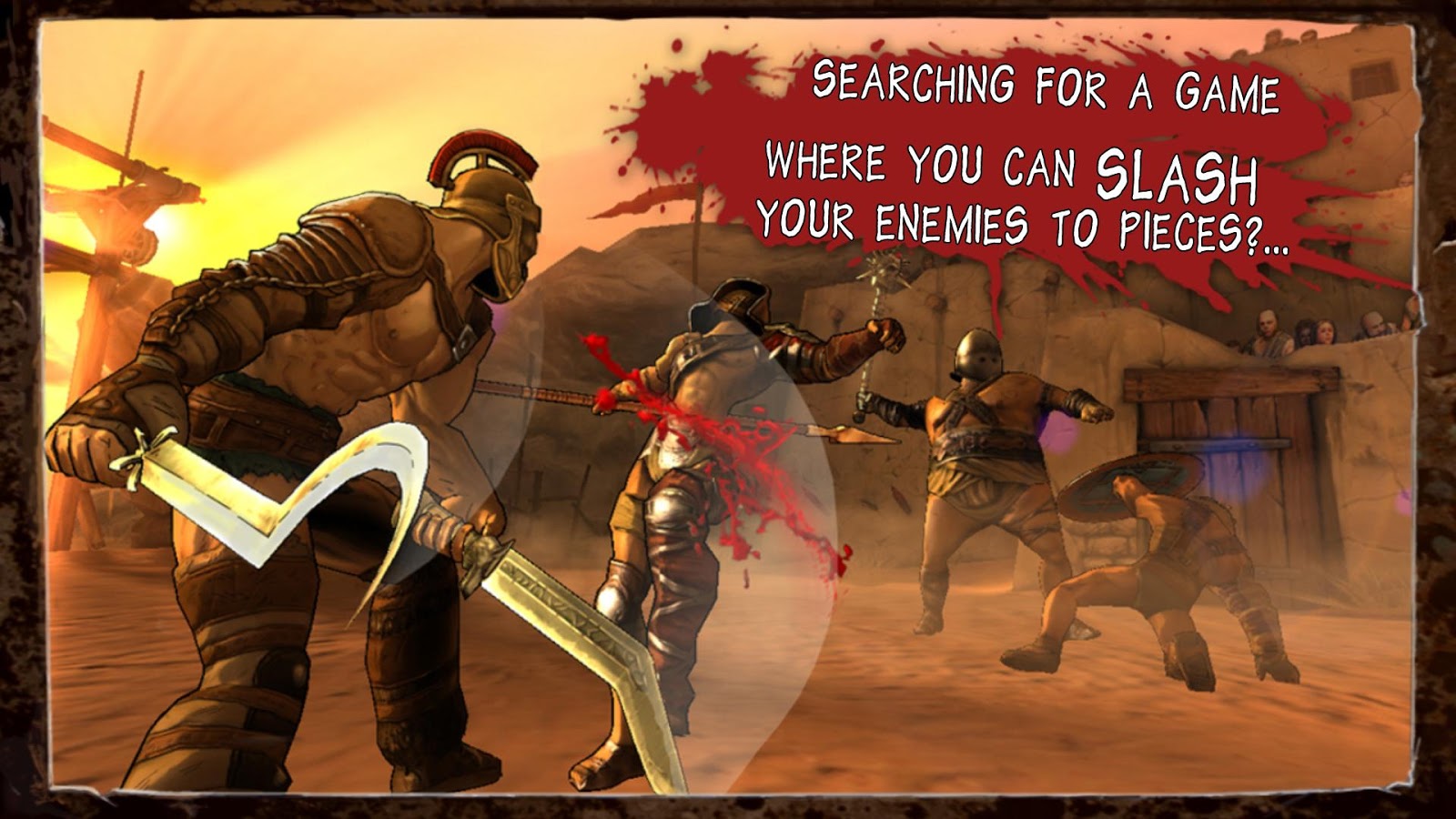 “The Action is exhilarating in the game that is rank #1 in 32 countries. Based on epic Gladiator movies and games of the past, I, Gladiator brings exciting and fast-paced gameplay to mobile.
Rufus is a Pawn between two warring Roman gods. For Rufus to gain control of his own fate and to get revenge, he has to start at the bottom and fight his way through a series of increasingly difficult tournaments in different locations. You play Rufus and you are his destiny!
Attack from different angles based on easy to use screen gestures and controls. You can also string together combos when you swipe continuously (like in a figure-eight pattern) until you run out of stamina. Swiping down kicks your opponent in the gut, knocking him down if unblocked and giving you a breather. Holding down the shield button can parry incoming attacks while holding and swiping allows you to dodge anything that can’t be blocked.”

If you’ve ever wanted to know what it was like to be a gladiator in Rome, now you can with I, Gladiator…

As you’re thrown into the arena, you need to kill as many gladiators as you can. You play as Rufus, who ends up as a pawn in a contest between two of the Roman Gods. To recover his own fate and get payback, Rufus has to start at the bottom and work his way up by fighting in a series of increasingly difficult tournaments in different locations.

The graphics for I, Gladiator really are great. Instead of going for the CGI look like most iOS games, the developers went for cel-shading. Because of this, everything looks super detailed and stands out well. The characters move without lagging and the overall scenery is very colorful!

In the menu, the music is fast paced and really gets you ready to start. However, when you press play the music disappears and all you can hear is the sounds in the arena – like shouting, clapping, cheering, booing, swords hitting together, grunting, crying – you name it.

All of the characters have their own voices, although they are speaking in Latin so you have to read the subtitles (unless you happen to know Latin, of course).

You can attack from a number of different angles based on how you swipe on your screen. Swiping down kicks your opponent in the gut, knocking him down and if unblocked and gives you a bit of time to rest. If you hold down the shield button, you can block incoming attacks, while holding and swiping allows you to dodge anything that can’t be blocked.

Another few tricks that will help you on your journey: tapping and holding can charge up a powerful blow. This is useful for beheading opponents who are stunned and low on health.

From what I could see by playing this game a while, there aren’t many in-app purchases available, however, you can purchase more money and it’ll cost you £4.99 for 90 gold. If I’m honest, I’m not completely clear what gold will get you but I assume I will find out by playing the game further.

In all honesty, this is a very high-quality game. It just wasn’t for me. I loved how much detail was put into the graphics, sound, and storyline but I didn’t enjoy the gameplay as much as I thought I would. I’d find myself swiping across my screen frantically, trying to kill my opponent.

However, I do see the appeal of I, Gladiator and why so many people love it. If you’re looking for a game with a great storyline and console-quality graphics, then this is the game for you. The only thing is that the controls are a little bit dodgy, but if you can deal with it then go ahead!

If you decide to download I, Gladiator, let us know what you think and if you agree or disagree with any of the things we said. Happy gaming!