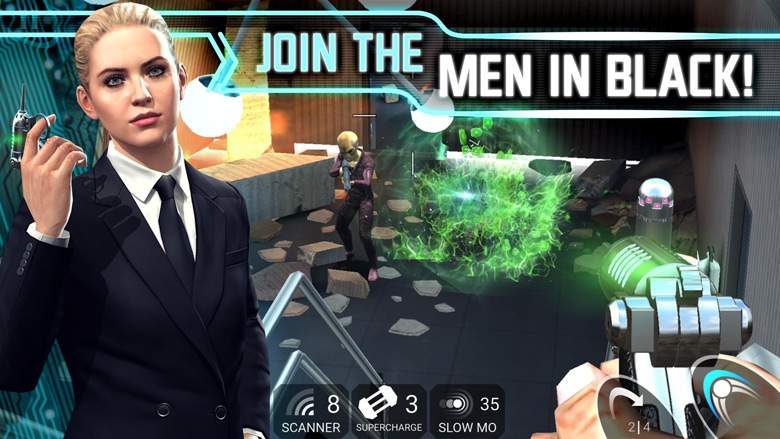 “TIME TO SAVE THE WORLD!

Join the ranks of the Men In Black, in the official mobile game of the MIB franchise! Alien criminals are invading every corner of the planet, threatening the safety of humankind. It’s time to choose your weapon, gear up and start hunting Aliens! Do you have what it takes to save the Earth?

Partner up with Human and Alien Agents to combat intergalactic attackers!

Head online and challenge agents from around the world to intense PVP duels.

Join forces with Clan friends to smash missions and climb the leaderboards!

This is one epic FPS alien blaster that you don’t want to miss!”

As mentioned, the graphics are a lot better than Sniper 3D, however, it isn’t the best I’ve ever seen. I wouldn’t say the visuals are of console-quality, but they’re definitely great for an app game.

I like that there’s a cut scene before every mission as it sets the story before you blow the alien’s head off.

The music is very sci-fi-esque and plays in well with the Men in Black theme. The sounds also include police sirens, shooting, and screaming. I think this is one of those rare cases where app music and sounds aren’t completely dreadful.

On the right-hand side of the screen, there’s a button where you can zoom in. Swipe up or down to zoom in and out of your target before you’re ready to shoot. Underneath, there’s a shooting button – try to aim for the head to gain more points. When an enemy is moving fast, like running, you can press the slow-mo button to make it a little easier.

Although Men in Black: Galaxy Defenders has a large similarity to Sniper 3D Assassin, I actually prefer it. If two games have exactly the same gameplay, but one has better graphics and sounds, of course, I’m going to prefer it. It’s clear that a lot of thought and work went into making this game, and it seems likely that I’m going to keep it on my phone.

If you decide to download Men in Black: Galaxy Defenders, let us know what you think and if you agree or disagree with the things we said. Happy gaming and stay casual!