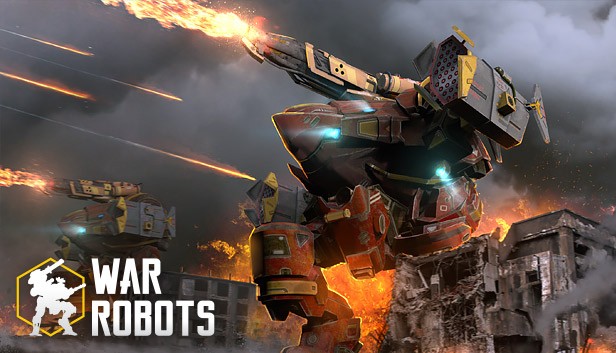 “Great to see you, Commander!

War Robots is the biggest shooter game about giant robots that fit into your pocket. Join epic PvP battles against rivals from all over the world and show them who’s the smartest, fastest, toughest pilot around! Prepare for surprise attacks, intricate tactical maneuvers and other tricks up enemies’ sleeves. Destroy! Capture! Upgrade! Become stronger — and prove yourself as the best mech commander in the War Robots online universe!

You are a robot, and it’s your job to destroy the robots on the other team. There are 5 robots on each team and the game lasts for 5 minutes, but if a whole team is destroyed before that time, the game will end early. When I first saw the 10-minute limit I was a bit worried because I thought that was quite a long time for an app game, so I’m glad the game usually ends early.

The aim of the game is to knock down all of your opponents while making sure you’re not shot in the process, this is really hard to do as the robots don’t move very quickly so it’s not easy to get out of the way. However, if you’re trying to kill someone on the opposing team, this can work in your favor as it’s likely they won’t be able to move away in time.

I was pleasantly surprised with the graphics for War Robots and definitely found them comparable to World of Tanks Blitz MMO in its dark, dreary, brown atmosphere that makes the game like a warzone. The graphics are smooth, they don’t lag and are pretty detailed in places.

In the actual gameplay, there is no music and all you can hear is the footsteps of your robot and shooting coming from you and around you. I’m not sure how I feel about there being no background music as it does feel incomplete but I’d rather this than there be annoying music that makes me delete War Robots.

The controls are where it all goes wrong. They seem pretty simple at first: to move your robot, you move the joystick on the left-hand side of the screen and to shoot, and move your tower around. The problem was how hard it was to get precision when it came to shooting your opponents. At first, you need to move into position, then you need to aim and shoot all at the same time and it’s ridiculously hard to due to how the controls are placed. I think a better way this game could have its controls is if it was in auto-shoot meaning all you have to do is aim and the game shoots for you.

The purchases are definitely worth it as you can upgrade your robots and guns with gold and silver, however, it’s definitely possible to get far without making a purchase.

The concept of War Robots is definitely great and has a lot of potentials but I do think with the controls being on the difficult side, it might drive people away from playing. I did enjoy the graphics and the actual gameplay, though. On top of this, I had no ads pop up during my gameplay which is definitely a first for an app game so if you’re sick of ads – try War Robots.

If you decide to download War Robots, let us know what you think and if you agree or disagree with any of the things we said. Happy gaming and stay casual!