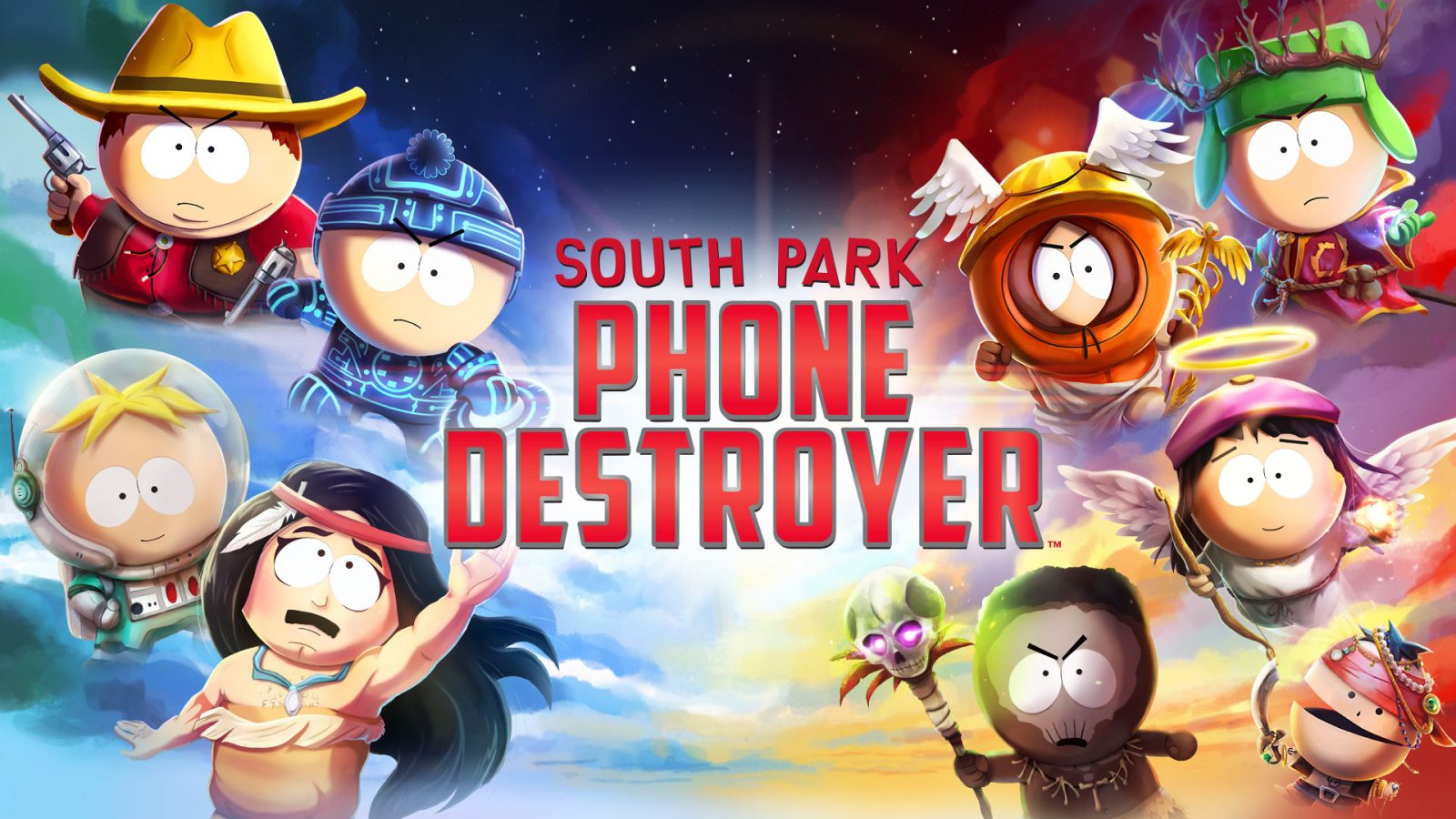 Are you addicted to your phone? Does going 2 minutes without your phone make you feel internal pain? This is the game for you. All those countless hours spent on your phone have been preparing you for this moment. Fulfill your destiny and become the ultimate phone destroyer!

South Park: Phone Destroyer is a free-to-play roleplaying game released in November 2017. The story has you playing as the new kid on the block who spends a lot of time on their phone. The usual South Park gang is there and they’re playing certain games, starting off with Cowboys and Indians. The teams chat with each other in a text group chat, which means that the game didn’t require an entirely new voice acted script to work. Which seems a little bit lazy and low budget to me. However, there are a lot of other sounds in it that makes it feel like you’re playing with the kids of South Park.  I guess that makes up for it! There are also voiced cutscenes where one of the South Park kids calls you on your smartphone to ask you to play with them.

The battles are automatic and seem to be rushed into. You have an energy bar and as you revive energy, you can put cards into the playing field. The characters will all move and attack by themselves, but it’s your own job to pick the correct ones to fight for you. The higher their number, the more powerful they’re going to be but this also means they’ll use up more energy. So be tactical!

The main goal is to defeat the boss. But if the new kid (you) dies first then you fail the mission and have to start over. The new kid stays in place on one side and the opposing kid stays in place on the other side. They keep using the cards until one of them dies. PVP works in a similar way, although it’s set on a timer so you could easily lose by having one less third of your health compared to your opponent.

After you’ve completed a mission or won a PVP battle, you get to open three lockers which have randomized cards in them. On the left side, it shows you the best possible loot you can find in the lockers but you only get to open three. If you miss the best loot completely then that’s your problem. The locker system basically means that you may end up getting very little for your effort. It’s based entirely on luck.

The graphics are great – very South Park-esque! But that was predicted.  If it didn’t look like the South Park cartoon, it would be a bit weird, wouldn’t it? It definitely looks like you’re watching an episode of South Park!

There’s a lot of depth to the graphics – in the main screen, you’re not overwhelmed with loads of buttons. The iconography is very straightforward and doesn’t leave you confused about how to even start the game. When you’re in the battles, the depth shows in the background, foreground and card overlay.

I really enjoy the music and sounds in this South Park: Phone Destroyer. I really can’t stand when a game has an annoying soundtrack, but this was surprisingly good. The music really fits in with the Cowboys and Indians theme perfectly.

Each card/character has their own weapon sound effects and even have their own voiceovers in some parts – usually when the boss is coming.

The controls in this game are fairly simple – and I couldn’t ask for more. I am just about sick of playing games and getting overwhelmed by the number of icons I need to tap. There are 5 cards lined up at the bottom of the screen and to play a card, you have to drag the cards into the playing field. And that’s pretty much it – now you sit there and watch your players fight. There’s also a health bar at the top of the screen and an energy bar at the bottom left of the screen. You won’t be able to draw a card if the energy bar is empty.

South Park: Phone Destroyer is free to play, but it eventually gets to a point where you can’t play anymore unless you spend real money.

If you have in-game dollars, you can use them to spend on lockers which furthers your chance of getting some good rewards. But this in-game currency doesn’t last long and you’ll quickly need to buy more with real cash. Then there are rare packs of cards you can play. In other words, everything in the game pushes you towards spending your hard earned cash.

You do get two free packs to open every four hours, however, they’re not the best packs and it’s not often that you’d get a rare or powerful card. You can speed up the four-hour wait by spending real money, of course.

For your money, you can get:

So, what do I think? I think this game has some serious potential – but it could be better. In my opinion, I doubt people would play this game if it didn’t have the words “South Park” plastered all over it. There’s nothing new on innovative about the game, but that doesn’t mean it wasn’t fun to play.

It’s definitely an adult game and contains quite a few curse words so I wouldn’t recommend it to children. But this is a great game to pass 20 minutes on your commute to work.

One thing I really enjoyed about the game was how everything was phone themed. You get text messages drop down from the top of the screen (as you would in real life) from the characters giving you tips and tricks.