– ONE OF THE GREATEST BOARD GAMES – Play the Hasbro classic by yourself or with the family and friends in your life on mobile or tablets!

– A PREMIUM EXPERIENCE – No pay-to-win, no ad pop-ups, no risk, approved by Hasbro

– HOUSE RULES – Play with the most common house rules

– QUICK MODE – Finish the Hasbro board game faster than ever

– SINGLE-PLAYER – Play against our challenging AI. No need for friends or family

– OFFLINE MULTIPLAYER – Play together and pass the phone between turns

– ONLINE MULTIPLAYER – Play MONOPOLY online with people all over the world from a different city or country or create private multiplayer games to play with your friends and family in life without any risk.

Hey Casual Gamers!  I can’t begin to tell you how long I’ve been waiting for a legit Monopoly game to go mobile.  I tried my best with Monopoly Slots, sadly it fell a bit short of board domination.

This version of Monopoly is a fully interactive board all new gaming pieces!  If that’s not enough to for you to pay the cost to play (under five bucks) then the various play modes might change your mind.

With a standard and quick play mode, you can get the feel of monopoly with chances and community chest in play or not.  Anyone who’s played the board game with family and friends know that it can last forever, but with set timers in the game, even the original mode didn’t seem too long.

It’s funny that a board game I’ve known since childhood can still look new and polished today.  I found that I had the most fun on my tablet over the phone.  It’s pretty nice to have the aerial view of the board.

With four boards and more coming, Marmalade Game Studio really outdid themselves with the design and attention to detail.

The boards are very animated with every interaction.  Going to jail feels like a pretty big deal now!

So while the sound effects and all the additional noises are great, the soundtrack is horrid.  There’s always a catchy tune for each board, but after a few turns it just becomes something you casually tune in and out.

Auction noises are usually the best to be aware of if you are trying to be top bidder.

We aren’t really here to listen thankfully, so this minor issue is something that’s easily fixed with turning it off or pumping your own tunes in.

The touch and go style of playing couldn’t be any simpler.  I’m known for having pretty clumsy fingers sometimes, and yet the buttons and options were far away enough to never have that issue.

I will say that the trading part of the game can be sometimes confusing.  seeing the other person’s assets can also sometimes look confusing.  Then there’s that one player who will want to strike up a trade with everyone.  This can slow the game down, but it’s nothing an emote won’t fix.

The Power of In-App Purchases 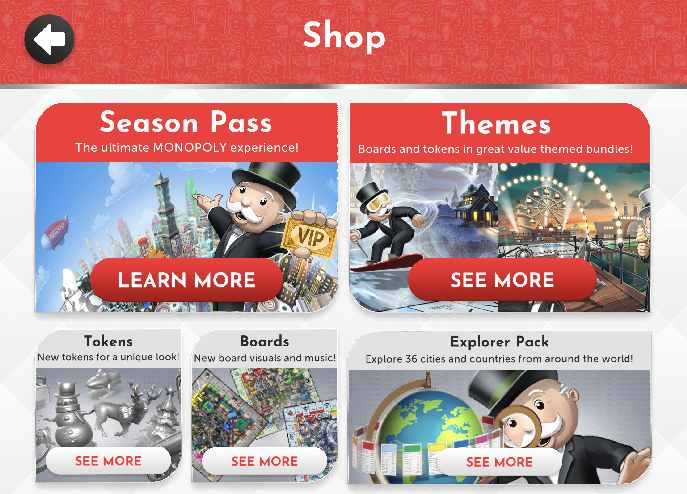 So here’s the biggest question:  Should you shell out for the season pass?

The season pass of Monopoly allows the use of all themes and tokens.  You also automatically get the newest theme that comes out.  Truthfully, if you are a fan of the game and you could see yourself playing more than a few times a week, then go for it.

At the end of the day, this is the best version of Monopoly mobile style I’ve played.  If you thought the best you could do was Monopoly slots then be ready for a well priced surprise!

While it doesn’t need to be said, Monopoly games are notoriously long and even the quick play takes a while.  Playing online offers real life opponents but there’s no pause doing plays!  When you can sit down and enjoy a few games, it’s well worth the trivial price tag.