If you’ve been under a rock for a decade or so, you’ve heard of the great Korean game Maplestory here and there.  Finally, Maplestory has made it’s way to our phones…and maybe our hearts?  This is Casual App Gamer’s Review of Maplestory M! 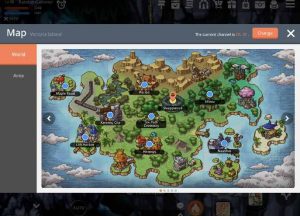 The story of Maple Story M is that a white mage was turned evil after attempting research on unlocking the secrets of light.  The journey drove him mad, and thus he became known as the Black mage, setting the stage for him to destroy all of Maple World.  The basic setup of Maple Story M is very clean and not overly crowded like many mobile MMORPGs.  Don’t get me wrong, it’s slightly overwhelming at first, but going through a few tutorials along the way helps navigate the many menu options.

The idea of it all is compelling enough to keep me playing, and the same time the quests you have to complete throughout the game instill a bit more background into the story instead of just being a wall of text. 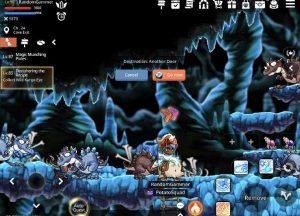 Like MapleStory, the game stays true to the graphics that bore it.  The mix of cartoon/anime styles give MapleStory M an enjoyable backdrop to look at while you blow monsters up.  A really good thing I’ve noticed is that none of the monsters seem to reappear with a different color, like so many of these MMORPG games like to do.  The boss fights, while they are cartoony to a fault sometimes, offer great detail and come with their own unique style of fighting.  At the time I’m writing this, i’m roughly around lvl 85 and I haven’t seen any cut scenes that show video.  That works for me.  After all, I always feel like cut scenes take something out of the game that’s not in there to begin with.  If you are into a cartoon feel with games, this is right up your alley!

The music compliments the graphics of the game by staying whimsical, and more importantly, not repeating itself after 30 seconds.  When you move from one section of the Maple World to another, the music accompanies the current location.  Most of your MMORPGs can be described by their music, and as far as MapleStory M goes, it stands true to that test.  The sound effects and power ups give a satisfying sound as you allow the auto-quest to do it’s magic. 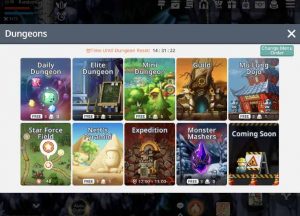 So the best part about many of the mobile MMORPGs is the option to auto-play your character.  Maple Story holds true to this mostly, with an exception.  You can let your character auto-fight freely for two hours each day.  While when you are at younger levels this may seem a bit odd, the higher you get, the more grinding will be needed.  This does not include auto-questing or auto-battling in dungeons.  Truthfully, you don’t even have to use the controls given to attack!  You can just let the AI do the work for you while you check out the contents of your bag or start forging upgrades for armor.

As I stated earlier, the menu and navigating through all the menus can be a bit overwhelming.  Once you do it a few times, it becomes a bit of a click fest while your character goes through slicing up bad guys and completing quests!

There is one thing to mention.  It’s ideal to set up your hp/mp potions early.  As you level you get potions from quest rewards, which when set by the hotkeys, keep the hp/mp levels topped off when set to auto mode.  You will also have to set your characters skills when they level up.  There are two sets of four slots for moves, totaling eight slots for some rather interesting combo moves. 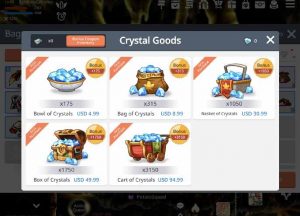 There is a TON of items and costumes you can spend crystals (the only in game currency to purchase) but there’s nothing you really need to buy in order to excel in this game.  If you want to glam out your character or want an extra pet, crystals is one of the only ways to go.  The price breaks aren’t too bad, but realistically, if you are getting ready to purchase on some crystals, KNOW WHAT YOU WANT TO BUY!  This is a simple tip that can help not only this game, but many others you decide to slip a few bucks to.

During my review and current play-through, I’ve yet to spend any real money.  I haven’t received any in-game currency, and as far as this play-through as taken me, the shop is the only way to gain crystals. 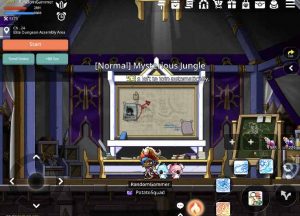 Overall, this is a game I will keep playing.  While finding a group in the lower levels to do some of the daily instances can be difficult, it’s one of the few mobile MMORPGs that isn’t confusing and littered with menus and other things i can’t use until i’m a much higher level.  The auto system is well needed in this game and while it’s a little clunky (you will see your character running into mobs and not killing them, or they will get stuck near an entrance) it’s fun to watch your character bust up monsters and the level up action is pretty cool too.  I’ve only used the directional controls a few times and rarely do any corrections with the exception of applying buffs and using items.

If you are a fan of MapleStory, or just like MMORPGs, this is right up your alley.  It’s the close you will get to a free game (MMORPG style) on your phone.