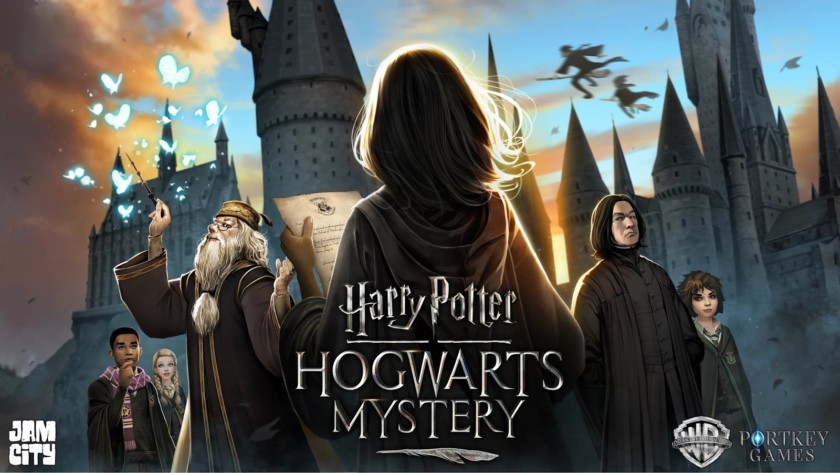 “Embark on your own adventure in this all-new RPG set in the wizarding world, years before Harry Potter received his Hogwarts letter. Explore never-before-seen rooms of Hogwarts Castle and investigate ancient mysteries. Learn powerful magic and knowledge from Professors Dumbledore, Snape, and more. Duel against your rivals and forge alliances with new friends to help you on your adventures. As part of WBIE’s Portkey Games label, this groundbreaking mobile game puts you at the center of an all-new story in the wizarding world.”

Today at the Casual App Gamer, we are reviewing the well-awaited Harry Potter game, Harry Potter: Hogwarts Mystery. Now, the vast majority of us love the book and film series. It was initially super exciting to find out we could play a free game at the touch of a button.

Straight away, you’re forced into creating an avatar. You can customize your hair and facial features and other features are currently locked (assuming that you can access them as you progress in the game).

There are characters in Hogwarts Mystery that have exclamation marks above their head, this means you need to talk to them. This is also the case for items as well, if you tap them, you can use them.

Once you’ve collected your items for Hogwarts, you’re taken to the Great Hall where you’re put into houses (I chose Ravenclaw). It has also become apparent to me that this game was set when Harry Potter was a baby. Dumbledore mentions “The Boy Who Lived, Harry Potter, is safe. Years from now, young Harry will be old enough to attend Hogwarts…”

If you’re familiar with Kim Kardashian: Hollywood, Hogwarts Mystery will feel very similar to you. The game is majorly based on a story and the decisions you make have an effect on the outcome of the game. For example, completing a task earns you house points and recommending outfit choices for Rowan (your new best friend) changes her appearance. What you decide to say during conversations can affect your characters empathy, courage, and knowledge attributes. This will unlock new dialog options once you level up.

The tasks are slightly annoying. Each task has a time limit ranging from an hour to almost half a day – crazy! Tasks can be completed by tapping on highlighted objects on the screen. Each tap will take away a certain amount of your energy. More energy is made by waiting long periods of time or by purchasing gems through in-app purchases. There are a few secret ways to get energy around the map. Unfortunately, you have to exit your task and lose all progress to get them.

The graphics are very familiar to me. It reminds me a lot of Sims 4 and I have no idea if they worked with Sims or if it’s just a coincidence – the similarity is uncanny though. Even the noises they make is similar to the Sims, but I’ll get into that later.

The look of the game is crisp, it doesn’t freeze much and the characters move in time to what they’re saying. I can’t really complain if I’m honest.

The music gets so boring after a while and the characters don’t really make any noises apart from humming and laughing. Which is boring. The music is very Harry Potter-esque although it’s still quite repetitive and made me put the game on silent.

I think Hogwarts Mystery would seem a lot more genuine if the characters had catchphrases they said. I think if they couldn’t find people who sound like the actual characters, it could become a problem so who knows?

The controls are easy peasy. If you see an exclamation mark, tap on it. Sometimes when you’re doing spells, potions or flying, a line will come up on the screen that you need to trace. And that’s just about how complicated the controls get on Hogwarts Mystery. Thank god, if this game had complicated controls I probably would’ve given up instantly.

It was quite disappointing to find out that this game was pay-to-win and you can’t spend 5 minutes on the game without having to wait for your energy to restore. Of course, it’s understanding why Jam City did this because they have to make money somehow. I do think they could’ve taken a different approach when it came to in-app purchases.

Here are some of the deals you can get from Hogwarts Mystery:

Harry Potter: Hogwarts Mystery is not quite what I expected, unfortunately. I feel like the game was very overhyped with an amazing looking trailer which made the game look a lot more interesting than it actually is. What game trailer doesn’t do this though?  I spoke to a few Harry Potter fans and I found out that they’re also disappointed with the free-to-play model and how repetitive the tapping gets. I know they didn’t keep the game for more than a week.

The free-to-play structure is unnecessary as the developers could’ve encouraged players to spend real money on clothes or wands, or to customize their characters. And there are many examples of free-to-play games that offer players the option to spend money without ruining the experience (Fortnite and Pokémon Go are good examples of this).

The most exciting part of this game is the storyline, wanting to find out what exactly happened to your characters brother and where he is now. That part of Hogwarts Mystery was executed perfectly.