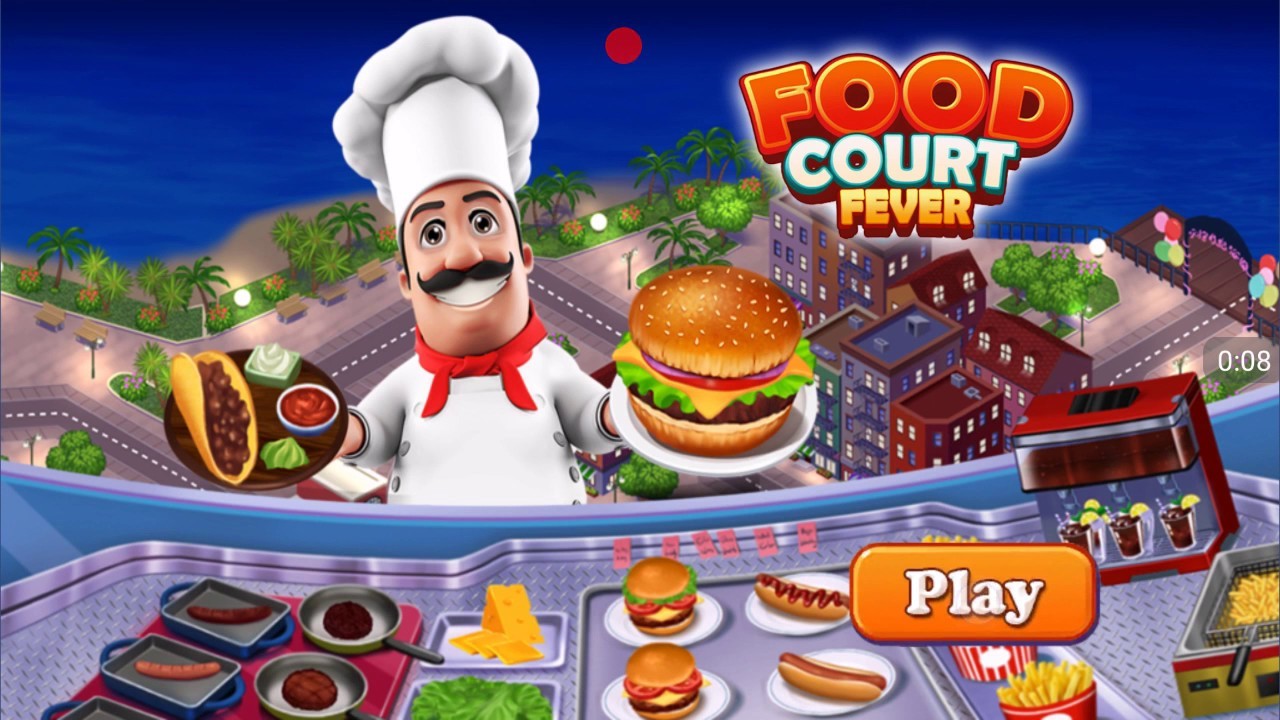 Need a little more heat in your kitchen? A little more charm in your cooking? Then this is the game for you! “Food Court Hamburger Cooking,” the latest and greatest game in the “Food Court Fever” series, has proved itself to be one of the toughest, funniest, and just all around greatest time management and restaurant simulation games on the App Store. Download this FREE TO PLAY game now and find out why!

No other cooking game has the fast and furious action of “Food Court Hamburger Cooking.” This exciting NEW adventure takes you to exotic restaurants all across a funky downtown city, upgrading your kitchens as you try to keep your crazy customers happy and well-fed! Do you have what it takes to become a Master Chef? Download now and find out!”

Feel like cooking without the stress of having to actually cook? Well, with Food Court Fever, now you can. You’re now the owner of the new, restaurant that has launched in the mall. To begin with, all you sell are burgers and cokes. The first few levels are very easy, maybe a little bit too easy, but as you progress through the game, the orders become more complicated and the customers become more impatient.

You’re then introduced to hotdogs, making the levels become harder and the number of customers gets increasingly higher. Keep an eye on the bar next to their order, as that starts decreasing, the angrier the customer gets.

There’s not much that’s unique about Food Court Fever, it reminds me of Cooking Craze and many other restaurant app games. However, it definitely has addictive gameplay.

As I mentioned, the gameplay reminds me a lot of Cooking Craze, and so do the graphics. That being said, I do think they’re slightly lower quality and that Food Court Fever was made with a lower budget.

I’m not really a fan of how the characters look, I think they’re pretty basic and don’t show personality through what they order, unlike Cooking Craze. What I do like is how bright the game is and the aesthetic of it makes me want to keep playing it.

The music during the gameplay is very cheery and upbeat, it can become annoying at times but not nearly annoying as every customer saying “Mmm” after every order. I feel like it definitely wasn’t needed and easily could’ve been avoided so I’m not driven to insanity. Good news though, in the settings you can turn off sounds and music if it really does bother – I would recommend you do this if you get easily annoyed!

As for the controls, they couldn’t possibly be more simple even if they tried. When a customer arrives, tap the correct food to give it to him and that’s it. There’s also an option to tap the money to collect it, but if you don’t it auto-collects so it’s not a priority.

In the store, you can purchase coins, gems, and boosts.

Purchases are going to help you with your progress on the game. For example, the Teflon coating will mean that you can leave the food on the stove for a longer amount of time and it won’t burn.

Food Court Fever is an extremely addictive game. It has you saying “one more level and then I’ll stop” numerous times… It keeps you thinking, and best of all, you don’t have to make any in-app purchases if you don’t want to.