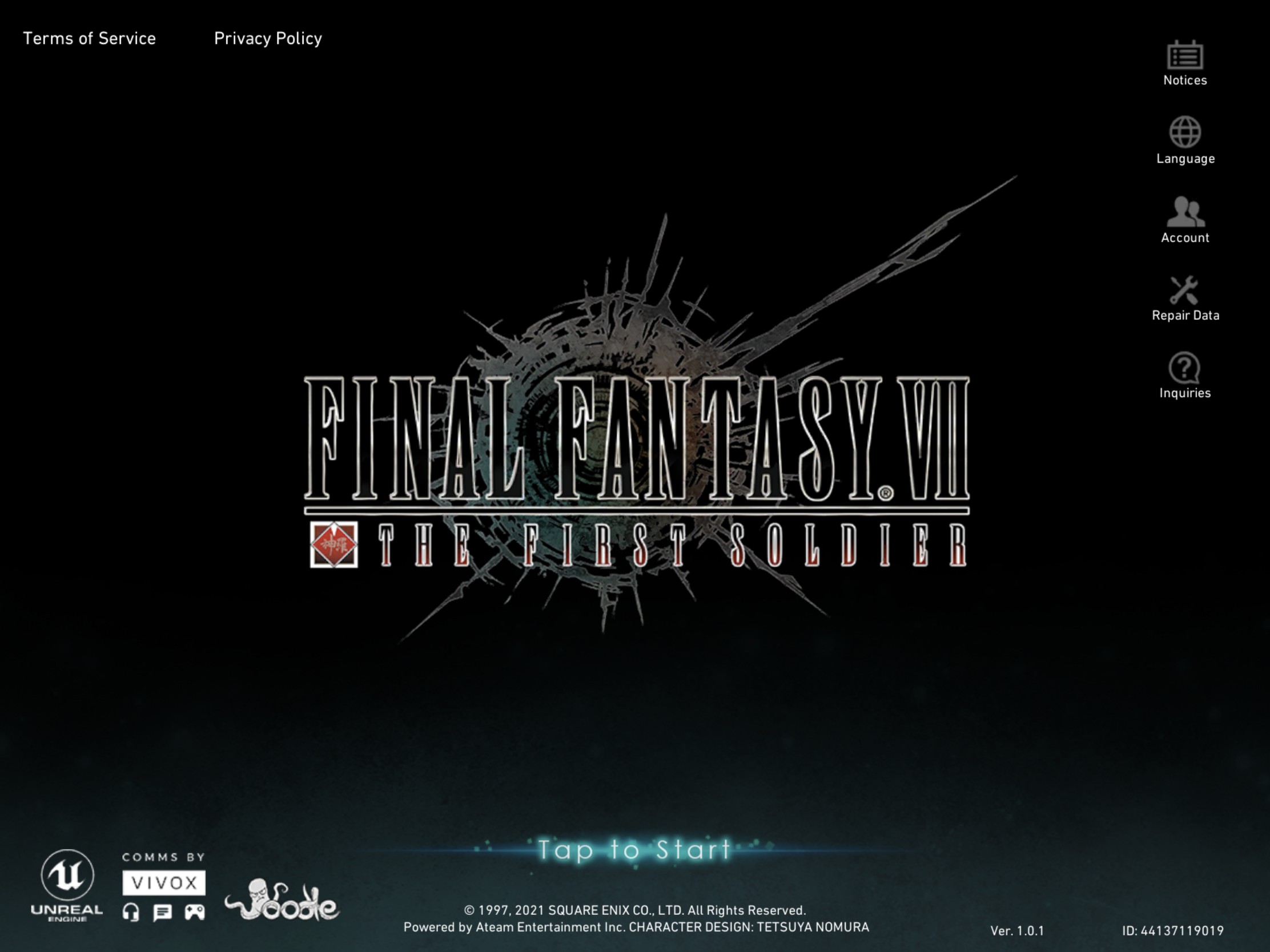 FINAL FANTASY VII like you’ve never seen it before!

Fight in matches of up to 75 players in this action game that fuses RPG and battle royale elements together.

Fight to join the ranks of Shinra’s elite SOLDIER unit in this high-octane battle royale shooter, infused with RPG elements from the FINAL FANTASY series.Choose a combat style, such as Warrior or Sorcerer, and eliminate your rivals by any means necessary, be it gun, sword, or magic.

Defeat monsters to earn experience points and gil, call upon fan-favorite summons such as Ifrit to fight for you, and catch a chocobo to dash and glide across the battlefield.

・Level Up and Upgrade Your Arsenal During Battle

Fight monsters on the battlefield to gain experience points, power up your skills, and raise your max HP. Use gil you pick up to upgrade your equipment and purchase items.

・Choose from Varied Styles, Each with Different Strengths

Will you be a Warrior and take the fight to the enemy with powerful melee attacks? Or do you prefer the ability to cast augmented spells as a Sorcerer? Perhaps sneaking in and out of combat as a Ninja is more suited to you? Choose from these styles and more before every battle to determine your playstyle!

・Visit and Play in Iconic Locations from FFVII

Seventh Heaven, Corneo’s mansion, the train graveyard, and even a familiar house surrounded by flowers are just some of the iconic locations you can visit in each expansive map.

Choose a look that fits your unique personality with a huge variety of costumes, emotes, and more.

Final Fantasy VII:  The First Solider is the RPG Battle Royale unlike any other.  Is this casual app worth time and space on your phone or tablet?  Lets jump out of our Shinra helicopters and find out!

Final Fantasy VII: First Soldier puts you in the boots of a SOLDIER candidate facing off against others to compete for a spot in the fabled SOLDIER program.

As with any Square Enix game, there’s a wonderful cutscene at the beginning to get you ready to face off against at least 75 other players in the Sector 7 slums of Midgar.

If you aren’t familiar with playing Battle Royale games, paying attention during the tutorial is paramount!  There’s plenty of different buttons and decisions to make before you even begin to play.  If you are familiar with said games, then this has a different vibe than most games in the genre.

For one, there are five different class styles to choose from.  Warriors, for example have a charging skill that can advance you into a fight while shielding you from most attacks.  Each class comes with it’s own abilities and can be leveled up during the fight.  This becomes highly important throughout the match as each class also has passive skills and bonuses.

As you are launched into battle the objective is to be the last man standing.  This is done by supplying yourself with items such as guns, potions, and materia that will help defeat the other candidates.

There’s no turn based combat here.  It’s killed or be roasted by materia!

Normally, if I said I was torn by the graphics, there would be some kind of negative thinking with my judgement.  With FF7:FS I’m more amazed by how fluid the gameplay is.

There are small times of rendering when moving to locations or making the initial drop into the map.  Outside of that it really just feels like a mobile map should feel.  What really makes this casual app shine from the other battle royales in the magic spells.

Magic is flashy and can change the tide of a battle in an instant.  From the blizzard spell launching ice shards to the powerful explosion of a fire spell, FF7:FS really puts any player right into the world of Final Fantasy with a first person view.

SOLDIERs are highly detailed and have a good bit of customization with them and shows in every interaction.

Not just because the music soundtrack is the best thing that’s ever happened in gaming, but there’s a large number of cues and heads up to listen for while playing.  Players can also customize how their SOLDIERs sound and react.

Outside of battle, the musical production is nothing you would expect from a app game.

Do your ears the best favor in the world and keep the sound on from start to finish.  While I’m sure an experience can be had without sound, it would be a great injustice not to have the volume cranked to the max while playing or idling on a menu.

For my casual gamers that are into simple controls, FFVII:FS has a bit of a learning curve.

The UI is adjustable and almost all the buttons can be moved anywhere on the screen.  While that’s great, there’s a great deal of actions to be used during battle.  Because of this, I would personally suggest having a wireless Bluetooth controller.

Then there’s the materia controlling.  Each SOLDIER can hold up to three materia at a time and MP slowly regain after a spell is casted.  Trying to cast a spell on the move without a controller is a nightmare.  Once you learn which shoulder buttons controls which materia, it brings a new aspect to any battle and can help get off a heal or finish off a fleeing rival.

Say it with me:  Bundles are amazing!

Final Fantasy VII: First Soldier has more bundles than you can throw a moogle at.

All items purchase are for skins and collectables, so there’s no real way to pay to win here.  That gives all players the same advantage when going into matches.

The stores and bundles mostly feel like a trip down memory lane.  Supporting this casual app with a purchase feels visually rewarding and a good purchase tagged with the first purchase bonus can usually net you two bundle deals.

Of course, this wouldn’t be a great casual app without the fated season pass.  Lasting 90 days, the season pass is massive and has an insane amount of items for anyone daring to complete it.

If I haven’t compelled you to play and download this epic casual app already, congratulations!  You have a massive amount of willpower!

Final Fantasy VII: The First Soldier really has found a way to combine the competitiveness of a battle royale with a side dish of RPG elements.

Truthfully, I really haven’t played too many battle royale games before playing this.  This casual app has really got me interested in how to it all works.

However, If you are new to battle royales there’s a bit of a learning curve when playing.  Thankfully, it’s something that can be improved on each play through.

There’s also a way gain powerful summon materia during matches!  So if fira can’t handle someone, call in the finisher Ifrit to char the remains.

Already at the top of the ranked leader board and looking to show off?  Drop a comment in our section below and give the new recruits some advice!

Happy Gaming, and as always, keep it casual.