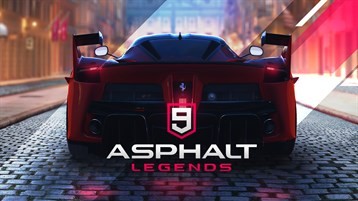 “Take on the world’s most fearless drivers and become the next Asphalt Legend – from the creators of Asphalt 8: Airborne.

Asphalt 9: Legends features an extensive list of real hypercars from renowned manufacturers such as Ferrari, Porsche, Lamborghini and W Motors. Pick your dream ride and race across spectacular locations around the world. Leave your limits in the dust and become a Legend of the Track!”

Asphalt 9: Legends is a racing game released this year. When you enter the game, you’re bombarded with a video that basically just shows off the cool cars you can collect. It also does a good job of showing off the graphics. I was impressed.

Firstly, Asphalt 9 takes you through a tutorial. It tells you how to drift, how to jump and how to do a speed power-up. It’s all fairly simple and easy to play. There are enough varieties of rounds to keep you entertained for a long time. For example, you can escape the cops, beat the clock for the best timing, or even by completing a whole bunch of stunts to show off your improvements.

Asphalt 9 features full-on arcade racing, complete with jumps, 360s, destructible environmental features and quite a bit of nitro. The game isn’t trying to be realistic in the slightest, but I think that’s what makes it so interesting.

Asphalt 9 has a selection of cars to chase and unlock, from the most amazing supercars to entry-level sports cars. You need a certain amount of blueprints to unlock the cars which makes it a little bit annoying when it comes to the freedom of choosing the cars you like. Asphalt 9’s various game modes all work towards the same goals, so you’re progressing no matter what happens. You will particularly make progress if you decide to join a club (which is like a guild for racers) and spend some time in multiplayer mode.

When it comes to graphics, Asphalt 9 has that console-quality that most developers promise yet fail to deliver. The backgrounds are amazingly detailed, the cars look insane from every angle, and the tracks are unique and full of character. It’s very easy to get an adrenaline boost while playing this game due to how realistic and smooth the graphics are. I’m not the biggest fan of racing games, and even I was blown away. So that says something.

The cars are also super realistic, including the likes of an Aston Martin Vulcan, Ford GT, Nissan GT-R Nismo, Ferrari 488 GTB, LaFerrari and the McLaren P1. However, it isn’t easy to get the better cars.

If we’re being real here, this is probably one of the best looking games on the app store. It offers visual quality that you just don’t get/expect with mobile games. It’s super aesthetically pleasing and just overall lovely for a free-to-play game.

Wow! Finally a mobile game without annoying music! Asphalt 9 has its own menu and race soundtrack which consists of mostly electronica and rap. To view the soundtrack, click here. It was nice to hear a whole range of music while playing this game, instead of being driven insane by the repetitive sounds.

Obviously, when it comes to the sounds within the game, there are the basics from any old racing game. You hear tires screeching, engines revving, crashing etc.

Asphalt 9 has added a Touchdrive feature that makes controlling the car a whole lot easier. Touchdrive automatically guides the car around the track and leaves you with only drifting and the nitro buttons to worry about. As you race, icons will appear at the top of the screen, indicating when nitro buttons, ramps or obstacles are coming up. When timed correctly, a simple swipe will put you on the path toward whatever feature you’ve chosen.

It’s a great feature but it isn’t worth using when playing the game’s eight-player live multiplayer races – you’ll most likely be beaten by racers who are using more exact control schemes. So it’s best to learn the controls anyway if you’re planning on trying out multiplayer mode! The Touchdrive feature is perfect for beginners or casual gamers – it will stop them from being put off by the difficult controls.

I decided to give Manual Mode a go and I instantly became bad at the game. Touchdrive is definitely the one for me – but like anything, practice makes perfect!

The shop isn’t full of anything special – and you can definitely get far without them. But if you’re interested in what Asphalt 9 has to offer, we’re here to tell you:

Like I said, this game is all about skill and winning the race. Not purchasing anything isn’t going to stop your progress, however, it might slow it down. But that just adds to the fun of spending time getting better.

Asphalt 9 is definitely a step up from Asphalt 8: Airborne. The most noticeable improvement is the graphics. I think Asphalt 9 has the most beautiful graphics I have ever seen – on a mobile platform anyway. It is smooth, vibrant, colorful and just overall aesthetically pleasing.

I thoroughly enjoyed the gameplay, although it didn’t really have a storyline. There are over 800 tracks available and that’s good enough for me.

In terms of controls, they’re easy to use and the Touchdrive feature makes it significantly easier for beginners to get involved and not get put off by the difficult controls.

Instead of having complicated controls, it encourages you to guide your cars instead of driving them. It resonates with the future of self-driving cars that will be the norm.

I will definitely continue playing this game after the review and you should too!